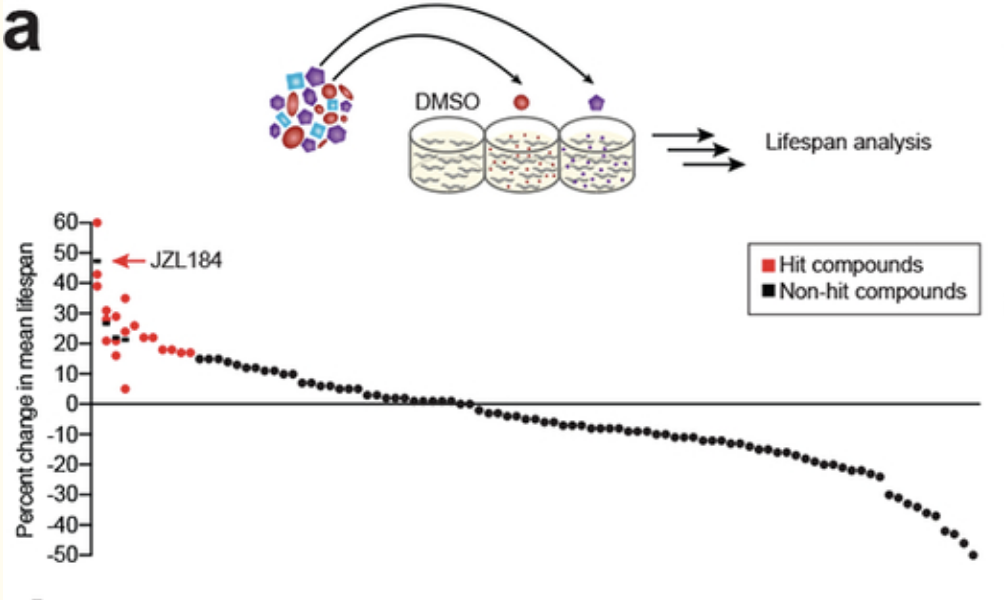 Recent studies in the field of Biochemistry have started developing a library of various small molecules that have been able to increase the life expectancy of C. elegans. C. elegans have been the model of choice for these previous trial-and-error based experiments primarily due to the ease at which these animals can be used in a lab setting and their relatively short, natural life spans of only a couple weeks1,2. This work has become an exciting subject of study when taken in context of other recent work that has identified fundamental signaling pathways in C. elegans that are conserved even in humans which implies the possibility that some of these small molecules may also have positive effects in humans3,4. There had been no previously published research into the actual mechanisms and pathways associated with these identified life extending molecules nor how these molecules could be scaled up to work in a human model.

Chen et al. sought to find the most effective and universally applicable of these identified small molecules and then develop a mechanism of proposed action as to why it is exerts it effect and how it could work in a human system. To do this, Chen et al. first performed a general for active serine hydrolase (SH) enzymes, one of the most universally prevalent enzyme families, in a C. elegans model using a biotinylated fluorophosphonate probe targeting the conserved active site in all members of the SH family. After narrowing down the list of SH enzymes prevent in C. elegans, Chen et al. proceeded to test 95 known SH-inhibitor molecules for its effect on lifespan and showed that the carbamate JZL184 increased lifespan by ~45% (results shown in figure).

JZL184 was primarily known as an irreversible inhibitor to mammalian monoacylglycerol lipase (MAGL) which is primarily known for degrading 2-Arachidonoylglycerol (2-AG) in humans; this enzyme however, that lacks any orthologous equivalent in C. elegans. Luckily, this inhibitor is known to conveniently bind to SH enzymes which allowed Chen et al. to perform simple binding assays with the inhibitor and previous identified active SH enzymes to find that the primary target of JZL184 in C. elegans is Fatty acid amide hydrolase-4 (FAAH-4), a variant of FAAH which is known to degrade a small fraction of 2-AG’s in humans. Chen et al. then go on to prove the relationship between JZL184, FAAH-4, and lifespan by knocking out the FAAH-4 gene and found that the knockout of the hydrolase produced similar effects as treatment with JZL184 and that JZL184 treatment didn’t produce a compounded life extended effect when FAAH-4 was knocked out, showing a dependence between the two.

This paper is primarily interested covering the possible pharmacological benefits of this JZL184 molecule, the experiment also reveals the importance of the still relatively novel, Cannabinoid system. 2-AG, a derivative of Arachidonic acid as the name implies, is a major agonist for the Cannabinoid receptor type 1 (CB1) and the primary ligand for CB2, the only two receptors in the system. CB2 is known for its presence in immune cells and association with cytokine release but these effects seem to be fairly unimportant in terms of the extended lifespan seen in the tested C. elegans as it is unlikely that pathogens would present in a lab setting. The more interesting target of 2-AG is the CB1 which is found in the central and peripheral nervous system and is associated with diminished cellular uptake of calcium in neurons which in-turn then lowers the release of neurotransmitters into the synapse in all nervous systems5. A colloquial example of the effects of this receptor is that THC, the active ingredient in marijuana, is known to be a major ligand for the CB1 receptor.

Any number of speculations could then be made about what the results of this research could mean for future research on the area and for the public at large. Should the media pick this up as “proof” for the literal life altering effects of smoking weed? No, no probably not. There are any number flaws in that conclusion and still requires many more years of research in the field to even reach a point where that question can be asked. It does, however, bring up several interesting points about the relevance of CB1 and, particularly for this class, the effects of 2-AG. While covering PUFAs in class, we ended up talking about the relationship between omega-3 and omega-6 fatty acids in a fairly one-dimensional way: omega-3s are for anti-inflammatory response and are good and omega-6s are for inflammatory response and are bad. This paper adds another, fairly important, dimension to this argument by showing that some omega-6 derivatives have a positive and even anti-excitatory properties.

Chen et al. developed a pathway to describe, to a certain extent, the mechanism behind their initial findings: an increase in available JZL184 irreversibly inhibits the function of FAAH-4, preventing it from degrading 2-AG, in-turn increasing levels of 2-AG which then upregulates the activity of CB1 receptors and that downregulates synaptic activity. The particular value of this result is one that Chen et al. emphasize several times throughout the paper is that they believe that this proposed pathway is also highly conserved in humans so that the research done in C. elegans could have major implications in the field of healthcare3,4.

While I didn’t cover everything that Chen et al. published doing in their experiments to develop this pathway so you will primarily just have to take my word for it that there are still some holes and other results that can still be looked into further. They found that FAAH-4KD C. elegans showed an increase in food consumption which was then counteracted by treatment with JZL184 and that this inhibitor also associated fairly will with the SH enzyme Y53F4B.18 and that knockout trials without that SH also showed minor increases in lifespan. Chen et al. certainly go well and beyond showing the importance on 2-AG in lifespan but there is still room for far more research into the related molecules and in the many branches present in their proposed lifespan increasing pathway.