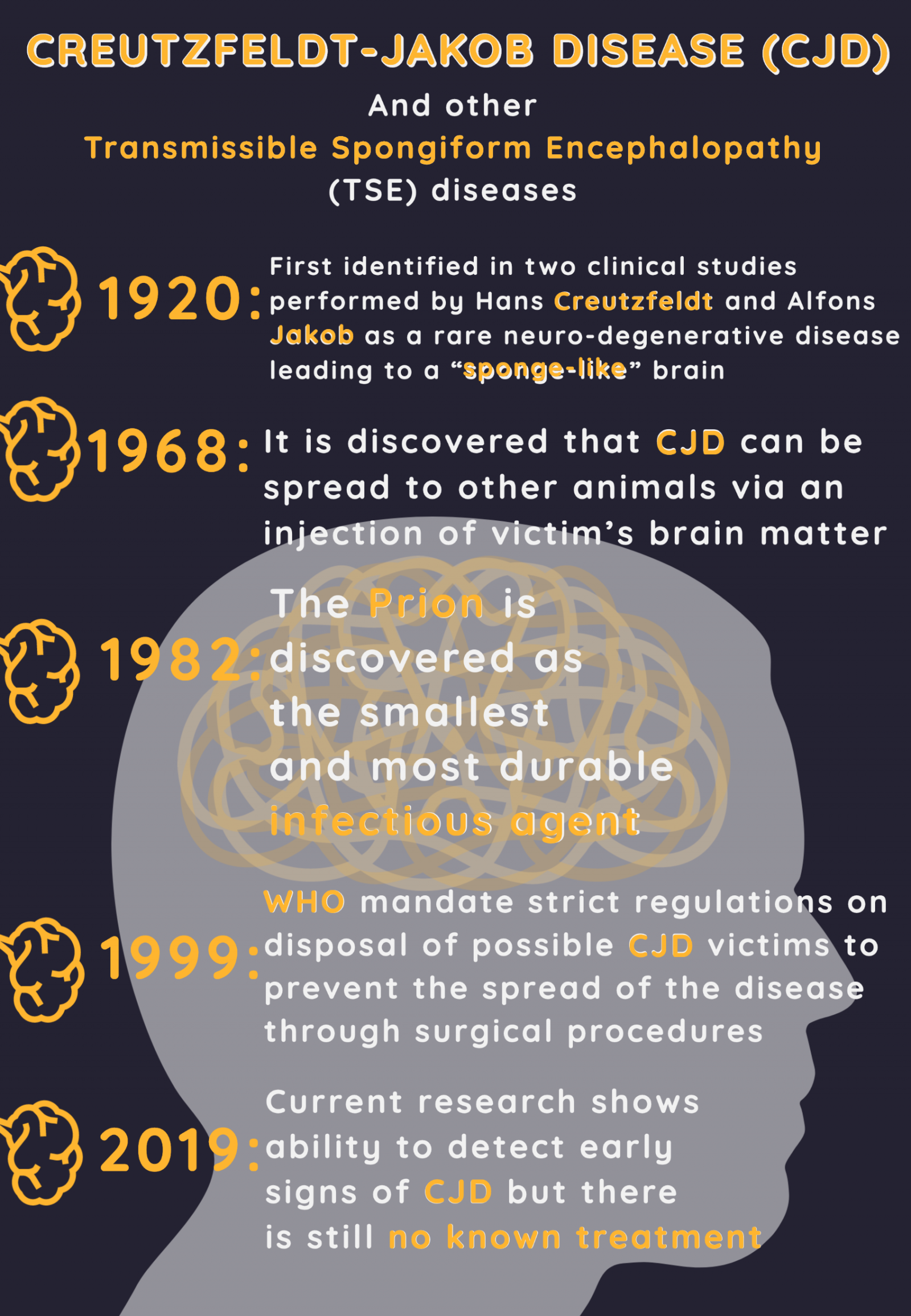 Creutzfeldt and Jakob Disease (CJD) was identified as a rapid cognitive and neurological degenerative disease with symptoms very similar to Alzheimer’s and Parkinson’s diseases only much more rapidly progressing. The most striking and unique symptom of CJD however, was that it causes holes to appear in the brain, perforating it until it resembles a sponge, officially known as Spongiform Encephalopathy. After first being discovered by German neurologists Hans Creutzfeldt in 1920 and then Alfons Jakob in 1921, this rare disease continued to pop-up around the world along with other diseases like Kuru, fatal familial insomnia, and Gerstmann–Sträussler–Scheinker syndrome that seemed to cause very similar symptoms. It wasn’t until the late 1960s that it was discovered just how unique these diseases truly were.

Diseases can typically be divided into groups depending on how they are developed. The previously mentioned Alzheimer’s and Parkinson’s diseases are genetic disorders. They are based on some mutation or error in your DNA that can lead to the development of the disease and, because it is based on DNA, these diseases tend to be passed on through offspring. There are also “vector” based diseases that are caused by microscopic organisms invading your body like Salmonella from Bacteria or the Flu from Viruses. Transmission of these diseases have nothing to do with heritage but instead contact through these ”vectors.” Before 1968 CJD seemed only to act as a genetic disorder, showing up in family lines and also often in isolated cases but never from any sort of disease spread between people. Then it was shown that if an otherwise healthy animal was injected with a little of the brain matter from a victim of CJD then the animal would then “catch” and develop the disease as well.

We now know the unique culprit behind this class of both transmissible and genetic diseases that all cause similar symptoms, officially known as Transmissible Spongiform Encephalopathy, the Prion protein. DNA is divided up into information sections called genes and each gene holds the information to make a protien and proteins are the main form that your genetic information is utilized the make you, you. Typically in genetic diseases there is something wrong with the DNA which leads to a problem in the proteins, stopping them from assisting in the functioning of the body and often times actively interfering with your machinery. But in the case of the Prion Protein there doesn’t need to be any issues in the DNA for there to be problematic prions, which is why people without any genetic risk factors can develop this disease as easily as anyone else.

The Prion protein is a protein found in all mammals that is typically harmless but on extremely rare occasion can spontaneously snap into a new form while undergoing it’s typical cellular activities. While in this new form, the prion is able to convert any of the many other normal Prion proteins that are around the brain into the new and infectious form. These infectious form prions start to build up into long, tough plaques in the brain that prevent the brain from functioning normally and leads to the eventual proliferation.

This mechanism in itself isn’t all that different from the way most Viruses, Bacetria, and other microorganisms cause diseases. Luckily, prions typically don’t naturally leave the body in the way Bacteria and Viruses do to spread between people. But when a defective prion enters the body, it is many times smaller and more resilient than any of these other “vectors.” A well-known example of this is variant CJD or “Mad Cow” disease that rocked the UK in the 90s that was brought about because cows were being fed the remains of other cows. One of these must have had a prion disease, which then spread rapidly within herds. No amount of food preparation could remove the infectious nature of these spreading prions, even if all Bacteria and Viruses would have been killed.

The biggest testament to the prion’s resilience comes from a small subset of CJD cases caused by surgical procedures. In the late 90s it became clear that typical sterilization techniques used to sanitize surgical equipment couldn’t remove prions. This meant that before the WHO instigated new regulations in 1999 there were victims of CJD who caught the disease from surgical equipment that had been used on another patient with CJD. CJD is the most common of all TSE diseases and despite its relative rarity still represents a unique type of partially genetic and partially infectious diseases that act on such a fundamental level of the protein that after 100 years, we still have no known cure or treatment for it.

-to the table of contents-

or quick links to each page:

6 thoughts on “The Third Disease Vector”